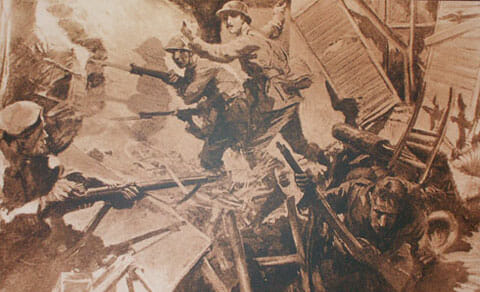 Welcome to the Museum’s World War 1 page. This page is a comprehensive guide to World War 1 in Athy with information on all of County Kildare, Ireland including local newspaper reports and a list of men from County Kildare who were killled during the war. Through this site we hope to give some idea of how the Great War impacted on Ireland.

During the Great War more than 2,000 men from Athy and district joined the British Army. Many were former soldiers, others joined to escape the poverty of Irish urban life or were young men caught up in the excitement of the time who enlisted for adventure and the opportunity to travel.

In 1914, a recruitment office was opened in Leinster Street. Recruiting in Athy was extremely heavy in the last three months of 1914 and while it eased off considerably in 1915, the Leinster Leader of 3rd June reported that: “the last official figures obtainable about recruiting in Athy showed that 1600 men from it and its environs had joined the colours.”

A nun from the local convent of Mercy had noted that men: “every other day came to the convent before their departure to beg for sacred heart scapulars to take away with them. Few of these poor fellows ever saw home again.” A local committee formed by Lady Weldon of Kilmoroney House collected funds to improve the comfort of the Athy soldiers. The local golf club put on entertainment for the benefit of convalescing troops. Athy technical School manufactured splints, bedrests, bed tray tables and crutches as part of the Irish War Hospitals Supply Depot Scheme.

An Athy man was awarded the highest British Army award, the Victoria Cross, for valour during World War One. John Vincent Holland, son of a local veterinary surgeon volunteered in 1914 after spending some time in Argentina as a railway engineer. An officer in the 7th Battalion of the Leinster Regiment, he took part in the Battle of the Somme. The 7th Battalion attacked the German trenches some 300 yards north of the village of Guillemont. Their swift attack took the Germans by surprise and wiped them out in their trenches. The bombers fearlessly led by Holland advanced and cleared a greater part of the occupied village. In the attack, Holland lost 21 of his 26 men and captured 50 German soldiers. The London Gazette noted that: “By this very gallant action he (Holland) undoubtedly broke the spirit of the enemy and thus saved us many casualties when the Battalion made a further advance.”

The award of the Victoria Cross to Holland was marked by special meetings of the Athy Urban District Council and Kildare County Council to register their appreciation of the honour bestowed on him. A public subscription was taken up in the county and a presentation was made to Holland on the occasion of his marriage on 17th January 1917. He later emigrated to Australia and died in 1978 at the age of 89 years in Tasmania.

“For most conspicuous bravery, during a heavy engagement, when not content with bombing hostile dug-outs within the objective, he fearlessly led his bombers through our own artillery barrage and cleared a part of the village in front. He started out with 26 bombers and finished up with only five, after capturing some fifty prisoners. By this very gallant action he undoubtedly broke the spirit of the enemy, and saved us many casualties when the battalion made a further advance. He was far from well at the time, and later had to go to hospital.” 3rd September 1916

It was not long before the news of the first deaths in the trenches of France and Flanders reached Athy. Patrick Heydon, a private in the Irish Guards, was the first Athy man killed during the Great War. He died in France on 4th September 1914 when the war was just one week old. Eddie Stafford died on 24th September 1914 followed by his brother Tommy on 6th September 1916. Brothers Joe and Anthony Byrne were killed within two days of each other in 1915. The Kelly family of Meeting Lane lost their sons John and Owen who had enlisted in the Leinster regiment on the same day in May 1915. Their younger brother Denis was killed on 30th September 1918. The Curtis family of Kilcrow also lost three sons, Patrick, John and Laurence. When the war ended on 11th November 1918, 102 men from Athy town and 82 from the surrounding countryside had lost their lives.