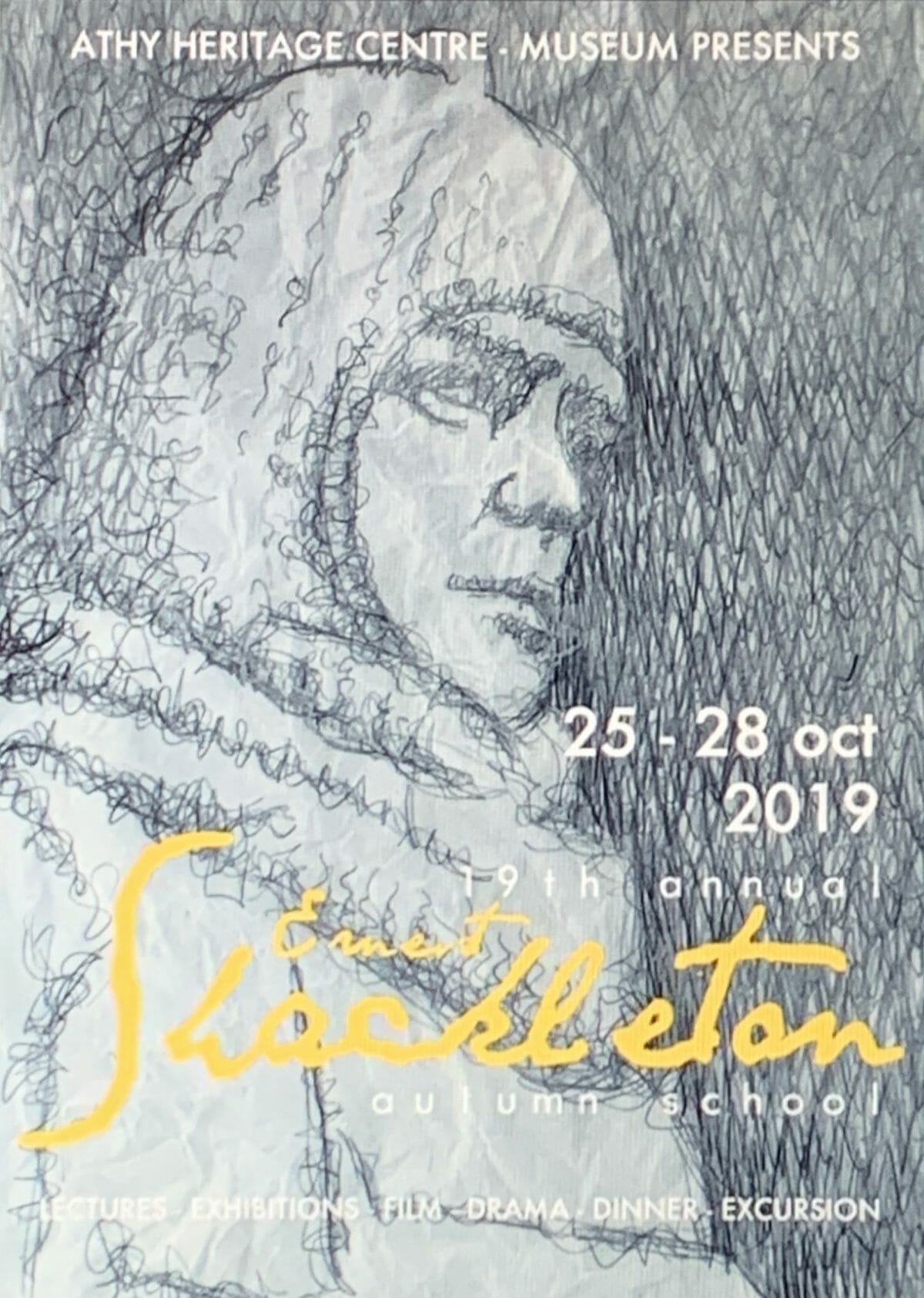 The exhibition focuses on Sir Ernest Shackleton’s final expedition to the Antarctic. The exhibition is complemented by artefacts from the Museum’s own and private collections.

10.00am “Bransfield and the Discovery of Antarctica” by
Jim Wilson

Leading experts attempt to fill in the backstory of an Endurance crew-member’s diary which surfaced on BBC’s ‘Antiques Roadshow’ over 100 years after it was written. Audience participation required!

Nicki Jemphrey, in co-operation with the Shackleton Autumn School, presents for further analysis a mysterious Endurance diary which her father acquired over 40 years ago. Polar experts Bob Burton, Philippa Wordie (whose grandfather James Wordie was a member of Shackleton’s Endurance expedition) and Jonathan Shackleton have spent the Summer reviewing the diary and will present their opinions on its provenance.

10.00am “A Matter of Time – How Greenwich Meantime came to rule the World” by Juliana Adelman

11.20am “The Rescue from Elephant Island – The Full Story ” by
Bob Burton

3.30pm – ‘‘The Flight of the Eagle’. This Oscar nominated film tells the story of S. A. Andrée’s Arctic balloon expedition of 1897, an ill-fated effort to reach the North Pole. The film stars Max von Sydow as S.A. Andrée, Sverre Anker Ousdal as Knut Frænkel and Göran Stangertz as Nils Strindbeg. Directed by Jan Troell

8.00pm ‘Shackleton and his Stowaway’

Shackleton and his Stowaway is based on the real events of the legendary Endurance expedition to Antarctica. It follows the misfortunes of an 18 year old stowaway who sneaks aboard Endurance. Initially in awe of Shackleton he becomes disillusioned when Endurance is crushed in the ice.

A production of the Stolen Elephant Theatre Company

Written by Andy Dickinson and directed by

10.00am Bus tour through Shackleton country. A visit to Ballitore and the home of Mary Leadbeater, writer and ancestor of Ernest Shackleton and Quaker Meeting House.

Mark is a sculptor specialising in fine figurative work through the tradition of architectural sculpture. He was taught by A J Ayres who, in turn, had worked with Eric Gill; other exponents of the tradition include Sergeant Jagger. Mark’s works can be found all over the world. His most recent commissions have included his acclaimed statue of Shackleton, unveiled in Athy in 2016, and he is currently working on a statue of the Irish patriot Roger Casement for Dún Laoghaire-Rathdown County Council.

Andy Dickinson is a writer, translator, and producer. His play Shackleton and his Stowaway has just been published by Methuen. Writing credits include the monologue Larisa, the play A Flame in Hero’s Tower, and the novel The Thinker. He is currently translating from Spanish Enrique Jardiel Poncela’s Eloise is under an Almond Tree.Andy has produced for the Olivier Award winning playwright Grae Cleugh with Scottish Widows; and for another Olivier Award winning playwright, Jack Shepherd, with a revival of In Lambeth. He was also the director of Grae Cleugh’s Scottish Widows.

Jim hails from the seaside town of Cobh, County Cork, Ireland. He is a highly respected ornithologist and ecologist with more than 40 years of birding experience in Ireland, Europe, USA, Africa, the Antarctic, and the Arctic. Before setting out as a full-time freelance wildlife author, tour guide, and broadcaster, Jim had a career in medical laboratory science and pathology IT administration. He has written a number of books including, The Birds of Ireland – A Field Guide (2013), Freshwater Birds of Ireland (2011), Shorebirds of Ireland (2009), Irish Garden Birds (2008) and An Identification Guide to Irish Whales and Dolphins (2006). He has produced two educational DVDs, Bats of Ireland (2009) and Whales and Dolphins of Ireland (2004). He also co-produced an iPhone app called Antarctic Wildlife Guide (2015), the first photo-ID guide app to the birds, whales, dolphins, and seals of the Antarctic Peninsula, Falkland Islands, South Georgia, the Beagle Channel, and Ushuaia. As well as being involved in many national and international conservation projects, he set up the long-running national Irish Garden Bird Survey. He was national chairman of Birdwatch Ireland, Ireland’s equivalent of the Audubon Society and is a former director of the Irish Whale and Dolphin Group.

Paul’s career was in the world of education as a history teacher and then as an LEA education officer in Dorset, Devon and Plymouth. Upon retirement he set up Kingsbridge Books: a second hand book business specialising in polar exploration and he exhibits his books at many of the major PBFA book fairs in the UK. This business has allowed him to indulge (and finance) his interest in collecting polar material. Paul has served on the committee of the Friends of SPRI and, in 2005, he set up the Devon and Cornwall Polar Society which has organised some major events in Plymouth to commemorate Scott and Shackleton’s expeditions. He is the author of From South Devon to the South Pole (2011).

Dr. Dirk Notz is a German climate researcher. He leads the research group
“Sea ice in the Earth System” at the Max Planck Institute for
Meteorology in Hamburg, and is one of the lead authors for the next IPCC
report. Dirk’s research focuses on understanding the past and future
evolution of sea ice in the polar regions of our planet. He has led
numerous expeditions in the Arctic, and has spent a good deal of his
life by standing on ice floes. He studied meteorology and physics in
Seattle and Hamburg, and obtained a PhD in applied mathematics from the
University of Cambridge. He is very engaged in public outreach
activities and has won several prizes for his clear communication of
scientific topics.

Dr David Whitehouse studied astrophysics at the world-famous Jodrell Bank radio observatory. He is a former BBC Science Correspondent and BBC Sciences Editor. He is the author of five books including The Sun: A Biography, Journey to the Centre of the Earth and Apollo 11: The Inside Story. He has written for many newspapers and magazines including The Times, the Guardian, Focus, New Scientist and the Economist. Asteriod 4036 Whitehouse is named after him.

Juliana Adelman is a historian and newspaper columnist for the Irish Times.  She is assistant professor of history in the School of History and Geography at Dublin City University.  Her research interests include the history of science and medicine, the history of food, environmental history and the history of nineteenth-century Dublin.  She was the founding chair of HSTM Network Ireland.  She is the author of numerous articles as well as a book on science in nineteenth-century Ireland.  She is currently completing a book on animals and urban change in Victorian Dublin.

Bob Burton is a natural history writer who has been involved with South Georgia for many years. He visited the island for the first time in 1964 and returned in 1971 to study albatrosses and fur seals. From 1995 to 1998, he was director of the museum at Grytviken and started to collect information on the island’s history. This included researching the time that Shackleton spent on South Georgia. Bob now visits annually as a lecturer on cruise ships.

Dr Murphy is a graduate of University College, Dublin (BA, MLitt) and Trinity College, Dublin (PhD). He has taught at both of these institutions, teaching European and Irish history as well as military history and the history of polar exploration. Between 1997 and 2005 he was a major contributor to the Royal Irish Academy’s Dictionary of Irish Biography, writing almost 400 biographical entries. During this period working for the Royal Irish Academy, he was also seconded to the Irish Manuscripts Commission. In 2004 he became the first Irish scholar to be awarded a fellowship to the West Point Summer Seminar in Military History. He is a member of various societies including the T.E. Lawrence Society and the Ormonde Military History Society. He is the author of a series of books on Irish military history

Hester Blum is Associate Professor of English at Penn State University. Her most recent book, The News at the Ends of the Earth: The Ecomedia of Polar Exploration, was published by Duke University Press in 2019. She is also the author of The View from the Masthead: Maritime Imagination and Antebellum American Sea Narratives (2008), which received the John Gardner Maritime Research award, and a number of edited volumes. Blum contributes frequently to Avidly, a channel of the Los Angeles Review of Books.